Not only do we provide the best but we also go beyond the call of duty with our after sales support. 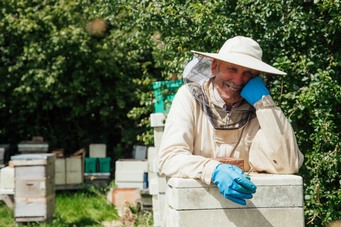 The Wise Old Drone’s Thoughts for May Bank Holiday…

The one great thing about keeping bees is that they never fail to surprise you. That is not to say that they are unpredictable creatures. There is a logic and efficiency in most of the things they do.

However even the most experienced beekeeper will sometimes encounter bee behaviour that cannot be explained during the course of the season.

This is the joy of keeping bees. Apart from the fact that you can get a crop of honey that is superior to anything you will buy from a supermarket, there is the thrill of observing them at work and seeing how they react to the changing year.

In an age that is conscious of its environmental responsibilities and ‘food miles’ there is nothing so carbon responsible as bringing in sugar from the garden. Bees make use of a resource that would otherwise go to waste.

There is nothing like the exquisite taste of blossom honey and a novice beekeeper can produce this almost as easily as someone with years of experience.

In fact, it would be extremely difficult not to produce better honey than is available at a supermarket.

Or have I droned on too much?

Meet Pete, our wise old drone, who’ll be sharing his nuggets of wisdom on the website each month

Originally from Basseleg, his interest in bees was sparked after wandering into the Royal Welsh Show beekeeping tent, in the year of the drought 1975.

Without knowing anything, he bought a nucleus of bees, and took it home on the bus – prompting several strange looks in the process

Though stung relentlessly in the first year, Pete went into business as a bee farmer near Cwmbran, and in 1979 became the Beekeeping Officer for the whole of Glamorgan, for the Welsh Office Agricultural Division.

He met Tim in 2006 at a Bee Association training day, sold him some bees, and started mentoring him in the art of beekeeping. They then went on to work in partnership, after his wife told him, “You can’t be an official hippy any longer!” Growing Natures Little Helpers from a 2 hive hobby, to the popular and thriving business it is today.

Pete’s favourite memory is tapping off his first jar of honey in his Mother’s kitchen, after his very first honey crop, and the satisfaction he felt as a result.

His favourite time of the year is the first inspection in spring. “The bees are quiet and gentle, and with a bit of sun on your back, it’s definitely the best time of year for me!”

As a keen wine buff, baker of sticky ginger cake, archaeologist, chess champion, and avid reader, we’re sure Pete won’t be short of things to do now he’s decided to retire from the business side of things.

However, he does still plan to carry on producing tons of honey, as well as continuing to contribute his expertise as a Beekeeper and Inspector to our wonderful world of bees.